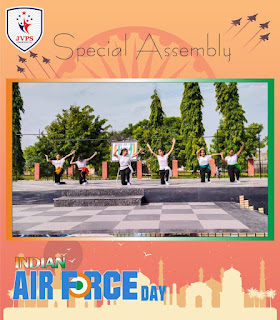 *India enjoys its freedom and sovereignty, because of the people who are protecting it.”*

"Sare Jahan Se Achha", which was followed by an exhilarating

dance performance illustrating the significance of the Air Force. All of the audience bowed

in homage to the valiant freedom warriors who gave their life for the nation.

Certificate Distribution for winners of various competitions was conducted.
Principal Ma'am's motivational remarks, emphasised the significance of young people's role in bringing about change in society, marked the conclusion of the assembly.”

Freedom is precious. Flag waving in the wind is a symbol of our freedom. Happy Air Force Day! Jai Hind!

Popular posts from this blog

Activity on best out of waste material

March 11, 2022
JVPS celebrated it's inspiration in the form of all the female teachers in the school. Their efforts at home and school were much appreciated and recognised. Teachers presented their views on gender equality,condition of women in society and the changes that they see around in relation to the gender. The school head and director both being female are leading the school successfully towards its ultimate goal of providing excellent education. School lays special emphasis on nurturing and developing it's girl students. It will give them courage to face difficulties and overcome obstacles in life.
Post a Comment
Read more

July 30, 2022
The festival of Teej celebrates the bounty of nature, arrival of rains and greenery surrounded by social activities, rituals and customs. Students of Jai Vatika Public School celebrated Haryali Teej with great joy and fervour on the school campus. Kids came dressed in traditional Punjabi dresses. The campus was decorated with swings and items related to Teej. A giddha performance was also given by girls. Addressing the kids, teachers briefed about the importance of the day and mentioned that Teej was primarily a festival celebrated by girls and women with songs and dances mainly in the northern and western parts of India. Tiny tots participated whole-heartedly in the fun-filled function. The Punjabi boliyan were presented by little vatikans. Traditional dances, bhangra and giddha were performed by boys and girls. Kids looked mesmerising in Punjabi attire with heena on their hands. The programme concluded with a dance competition for tiny-tots. #Kindergarten #Teej Celebrations #Dance co
Post a Comment
Read more